Fed Patience and Other Curiosities 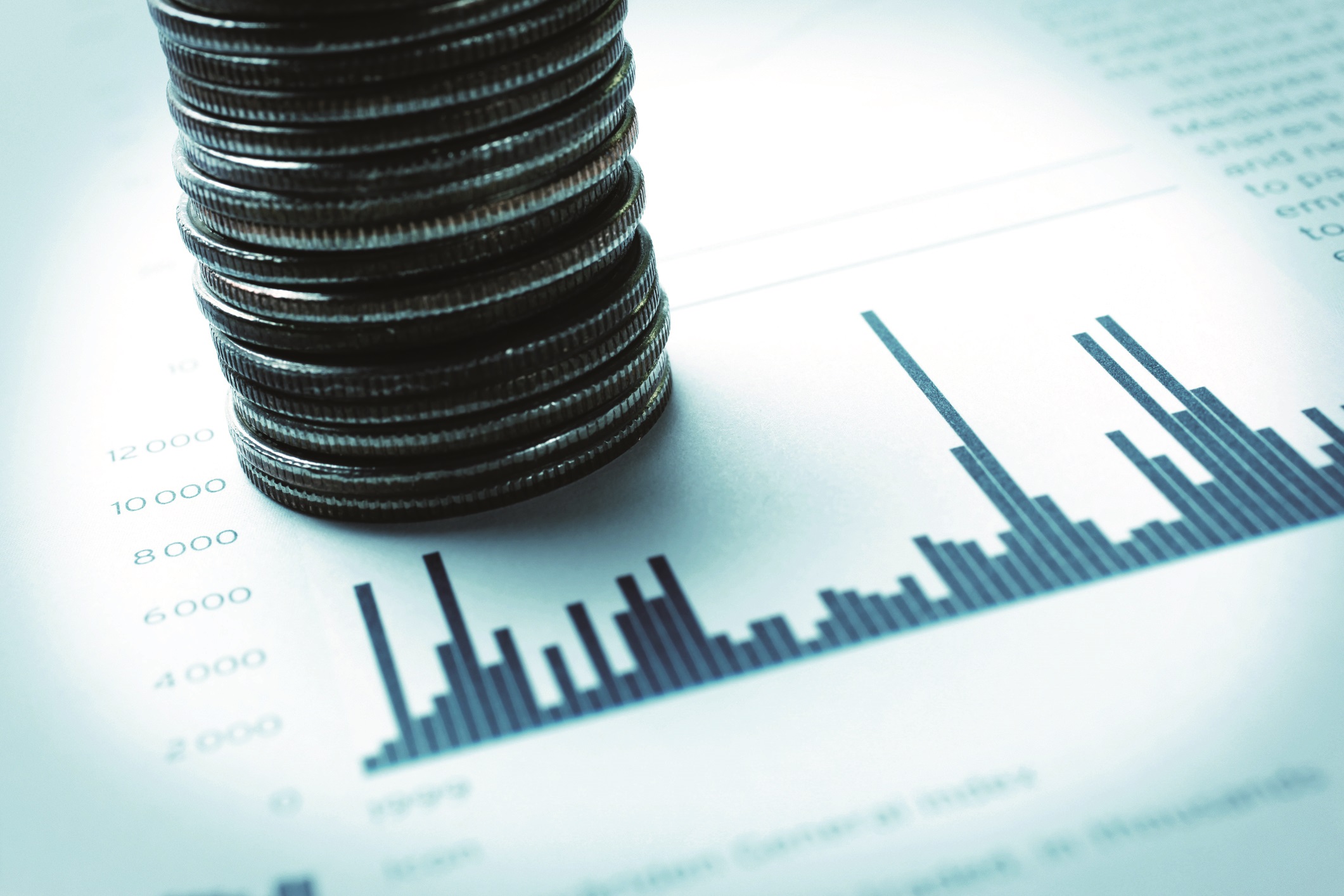 After 3 Years, The Federal Reserve Signals It May Stop Raising Rates. Why Now?

Of course, that’s not to say nothing happened this week.  When the FOMC released a statement from Chairman Powell, explaining why nothing happened, a number of other things started to happen.  Confused yet? Don’t worry – most of what the Federal Reserve says and does about interest rates seems designed to confuse people, especially investors who are trying to figure out US Capital Markets.

The “Nothing” that happened involves the Federal Funds Rate, the target overnight interest rate for inter-bank borrowing or lending.  This is where US depository institutions, in the tightly controlled, invitation-only world of Federal Reserve interbank loans, lend their reserve balances to each other.  The very short-term overnight rate stands as a touchstone for other interest rates throughout the world’s lending markets – one of those being US Treasury market (more on that in a moment).  So, the Nothing that happened was that the Target Federal Funds Rate didn’t change. The Explanation from the FOMC regarding Nothing, in turn, provoked the markets into doing Something.  The latter includes, among other things, a sudden 1.56% one-day rally in the S&P 500 stock index and a 434-point surge in the Dow Jones Industrial Average (Dow).

The FOMC has been slowly, incrementally increasing the Target Fed Funds rate now for 3 years, and with increasing frequency.  They raised the rate once in both 2015 and 2016, 3 times in 2017 and 4 times in 2018.  In the explanation released by the FOMC, we learned from Chairman Powell that the Target Federal Funds Rate will not likely be increasing any time soon.  There were comments about ‘patience’, and how the case for additional rate increases ‘has weakened’.  Chairman Powell also tossed in phrases that some market pundits call ‘guidance’ – as in, guiding us Fed-watchers in the crowd that we shouldn’t be surprised at all if the next rate increase turns out to be a rate cut.  After nine consecutive rate increases, that’s some serious guidance and a relatively big Something.

Like critics of the President, there are many loud and diverse critics of the Fed.  One of the louder, more frequent criticisms of the Fed is that it pays too much attention to the manic-depressive tendencies of the stock market while paying too little attention to the comings-and-goings of Monetary Policy.  In this context Monetary Policy means tracking things like money supply, inflation statistics, wage and job growth, and housing prices.  While criticizing the Fed is a time-honored tradition and a favorite Wall Street sport, we think the critics have it wrong this time.

I find more support for the argument that the Fed is not acting at the behest of the equity markets or is coming to the rescue of stockholders; rather, it looks to me like the Fed and the stock market are both listening to the bond market.

Shortly thereafter, the stock market started to swoon.  By the end of October, the S&P 500 was down over 200 points, closing at 2711.74.  November saw a slight recovery, back to 2760.17, but then followed three weeks of declines in December.  The S&P 500 closed on December 18th at 2506.96, down by more than 250 points from November, and approximately 17% from its peak 3 months earlier.  Officially, the S&P 500, along with most other major US indexes, stood at the threshold of a full-blown bear market correction (down 20%).  On the next day, December 19th, the FOMC surveyed all the pertinent facts at their disposal and raised interest rates again, by .25%.

That is, the FOMC raised rates even though the US equity markets were already bleating in agony.  So what happened to stocks after yet another FOMC rate hike? From Christmas Eve to January 29th, the S&P 500 ‘unexpectedly’ rallied some 12.5%!

Only then did the Fed explain that it might be time to rethink its direction. Some afore-mentioned Fed critics claim that the FOMC has ‘capitulated’ to equity market investor interests in the vain hope of sustaining an otherwise-unsustainable bull market in US equities.  However, as we show above, the timeline doesn’t particularly support that interpretation.  If the Fed wanted to throw a lifeline to equity markets, would they wait over a month, hoping for a 12%+ rally? Were they waiting for equities to sell off a bit more, officially falling into bear market territory, thus making their intentions even more obvious, provoking even more criticism? How is not raising rates – doing nothing and then explaining how they are only pausing to re-examine data and options – really a lifeline anyway?  At best, this week’s Fed statement is a vague promise to maybe, someday consider a market bail out as they meanwhile consider a policy that still may include a few more painful rate increases.  What was the December rate move then?  Just as everything was seemingly spinning out of control, was it an attempt to tip the market over, justifying rate cuts?  That doesn’t sound plausible.  It certainly doesn’t sound like palliative equity-centric policy to me.

So why did the Fed pause when it did?

Time to look at the bond market.  Specifically let’s take a look at the US Treasury (UST) Note market, from 2 years out to 10 years.  All other things equal (even though they never are), it is an accepted truism that lending money to anybody, even the US Government, is more risky the longer the term of the loan.  More bad things can happen in five years than three. The bond markets solve this question with pricing – making longer-dated bonds offer more yield to make up for the additional time risk.  So generally, 10-year bonds are considered riskier and must yield more than 5-year bonds, which must yield more than 3 year bonds and so on.  On most days of most years, the term structure of interest rates increases with longer time horizons, creating an upward-sloping yield curve.

We say most days because there have been times when the yield curve is actually relatively flat.  In fact, there are times when it actually inverts – when short-term yields are higher than long-term yields.  Why would that happen?  Well, the short explanation is that investors come to believe that short-term rates have become unsustainably high relative to long-term rates.  They reach that conclusion in large part because they believe the FOMC has gone too far in raising short-term interest rates to cool inflation, slow the economy or tamp down money supply. The evidence for that explanation can be seen in the graph below. 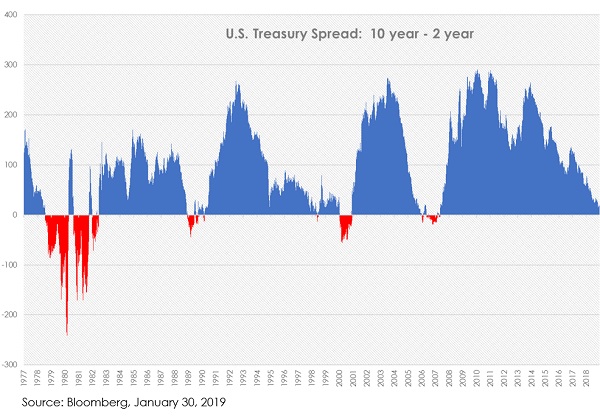 This graph shows the spread between 10-year UST Notes and 2-year UST Notes going back over 40 years.  This is an important relationship because while 10-year Note rates are generally set by investor judgements regarding inflation, 2-year Notes are more significantly influenced by the Fed’s short term rate-setting activities.  The ‘red zones’ in the graph show the times that the spread “inverted” and dropped below zero: in the early 1980’s, 1989, 1999 and 2007.  Investors also know that the last 4 recessions started in the early 1980’s, 1990, 2001 and 2008.

Investors concluded long ago that the two series of dates above are not a coincidence.  In statistical parlance, we’d say that a yield curve inversion has a perfect record of forecasting a recession in the coming year, with neither Type 1 (false positive) nor Type II (false negative) errors.  To be clear, there are also alternative yield curve calculations (3month-10yr, 2yr-30yr, etc.) that some bond market gurus consider statistically more efficient, but that’s another discussion.

Consider one last data point: the 3-month US Treasury Bill tracks very closely to the FOMC Target Rate over time, sitting at 1 basis point today.  Back on December 19th, as the Fed was considering its last increase, the yield spread between 3-month T-Bills and the 2-year Note was around .25% to .30%.  The Fed could view this spread and conclude that even if they raise the overnight rate by another 25 basis points, enough spread cushion remains between short T-Bills and the 2-year Note to absorb one more increase without inverting the full term structure out to 10 years.  By January 29th, the spread between 3-month T-Bills and 2-year Notes collapsed to just 16 basis points.  So do the math today: if the FOMC hikes rates another .25% and most of the increase also passes into the 1-year & 2-year portion of the curve (and 10-year yields hold fast), the bond market’s magic, super-accurate recession alarm goes off.

We’re not saying bond auctions and yield curve inversions are the only reason the Fed put interest rate increases on hold for now.  We also recognize the Fed has at times paid too much attention to the equity markets.  We just don’t subscribe to the theory that the Fed is at the beck and call of equity investors or ‘bailing-out’ stock bulls, at least not under Powell.  For now, the Fed looks to be taking more of its market direction from the thousands upon thousands of investors setting long-term bond rates, who in turn trade and invest based on their interpretations of economic statistics like inflation, wage and job growth, money supply, housing prices and the like.  The Fed seems to be listening to the bond market – which is screaming “Don’t invert the yield curve!”  Critics take note: As the Fed traverses the economic landscape trying to avoid a recession, listening to the bond market not only sounds more reasonable, it should actually be quieter.

This material is provided solely for informational purposes and does not constitute investment advice on the matters addressed. Neither Pentegra Services, Inc., its subsidiaries, nor any of their respective employees intend that this material should be relied on as investment advice, which should be sought from a professional advisor. Performance information shown reflects past performance and does not indicate or guarantee future investment results. Current and future results may be lower or higher than those shown.