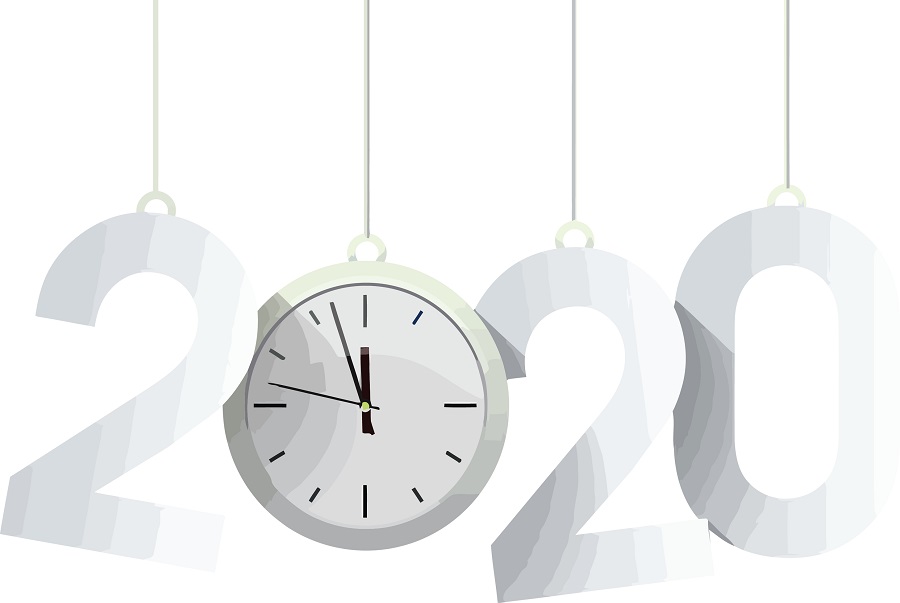 As we head into 2020, below are five questions relating to current trends and topics which are expected to impact retirement plans, financial markets and savings next year:

After declining by -4.4% in 2018, the S&P 500 Index is on target to return about 30% in 2019, surpassing expectations and virtually all international stock market returns. This big turnaround has been fueled by four major factors: (a) general optimism regarding U.S. trade policy, including rollback of some tariffs imposed on Chinese goods; (b) the Federal Reserve’s decision to cut its federal funds rate three times in 2019 after raising rates four times in 2018; (c) strong growth in U.S. consumer spending which has compensated for weaker business spending; and (d) continued buybacks of company stock which have supported price per share gains.

What are possible headwinds heading into 2020? Fundamentals, which include company earnings, economic growth and valuations, may play a more prominent role. First, there has been a significant slowdown in economic growth outside of the U.S., with pullbacks in manufacturing, and near recessionary indicators in Europe and elsewhere. While the U.S. has shown steady, albeit slowing growth, there may be further weakening in 2020, particularly if global growth continues to slow. Second, corporate earnings have been flat or declining on a year-over-year basis after double digit gains in 2017 and 2018. Though earnings are a key component of stock prices, the slowdown in corporate earnings didn’t slow down momentum in the stock market during 2019. Will earnings have an adverse impact in 2020? Third, valuations for large cap stocks, such as Apple, Amazon and Google have been at record levels. At some point, these valuations should come back to more normal levels though it is hard to forecast when this will happen.

It is impossible to predict how the U.S. equity market will behave in 2020. Most analysts expect significant volatility in stock prices, particularly in an election year, with any gains in the vicinity of mid-single digits. In this environment, it continues to be important for investors to diversify their portfolios.

2. What will happen with U.S. interest rates?

In 2019, interest rates were a tale of two maturity ends of the U.S. Treasury yield curve. Yields on bonds with short maturities (1 year or less) fell due to three Federal Reserve (Fed) rate cuts during the year. Rates for bonds with longer maturities (10 years and longer) stabilized after falling significantly between June and September.

The fall in shorter rates has generally reduced returns for retirement-age savers. According to bankrate.com, average 1-year CD rates declined from a 2019 high of 1.39% in June to 1.24% in December. While defined benefit pension plans generally suffered declines in their funded ratios due to the fall in longer term interest rates, the recent stabilization in rates, along with the market rally, have helped stem the drop in their funded status.

As with any future event, it is unclear what will happen with interest rates in 2020. The Fed is currently signaling a hold on rates or at most one rate cut in 2020. They will have to balance a slowing U.S. economy and mild inflation, versus external risk factors such as tariffs, slowing global economies, Brexit, oil prices and geopolitical tensions.

3. Where are regulations around fiduciary standards headed?

In 2018, the move toward a uniform fiduciary standard for brokers and advisors was disrupted when the Department of Labor (DOL) fiduciary standard, also known officially as the “Conflict of Interest” rule, was repealed by a Federal court. Into this vacuum stepped several parties: (a) the Securities and Exchange Commission (SEC), which issued its proposed best-interest (BI) standards in April 2018. These would require broker-dealers to disclose conflicts of interest and to “exercise reasonable diligence, care, skill and prudence” to ensure they are selling products and carrying out transactions that are in a client’s best interest1; (b) the DOL itself, which announced it would release new advice rules; and (c) various states, which have proposed their own fiduciary regulations.

After extensive comment, litigation and review, the SEC BI standards were approved in June 2019 and are expected to become effective June 30, 2020. The DOL is expected to re-propose their fiduciary rulemaking, though the timing is uncertain. And at the state level, New Jersey, New York, Connecticut and other states have introduced state-based fiduciary standards for advisors and brokers operating in their respective jurisdictions.

The regulatory environment around fiduciary standards remains unclear heading in 2020. However, the SEC BI standard- if enacted-while considered less strict than the DOL Conflict of Interest Rule, would strengthen protections versus older fiduciary standards.

4. How will the SECURE Act affect the retirement industry?

After months of remaining in limbo in the Senate, the U.S. Congress passed the Setting Every Community Up for Retirement Enhancement (SECURE) Act in December 2019. While it may not significantly impact the overall retirement savings crisis in the U.S., the SECURE Act is considered the most significant pension legislation passed since the 2006 Pension Protection Act (PPA). The SECURE Act provisions include: increasing the age for Required Minimum Distributions (RMDs) from 70 ½ to 72; easing IRA contribution restrictions; expanding automatic enrollment and facilitating lifetime income disclosures and product offerings such as annuities. Perhaps the biggest impact is to ease regulations and increase incentives for employers to join together to create open Multiple Employer Plans (MEPs) and to expand retirement plan participation to part-time workers.

While ETF assets remain a relatively small fraction of the total of passive index funds and actively managed funds, there has continued to be an explosion in ETFs. ETFs have been a preferred vehicle for investment advisors to rebalance their clients’ portfolios.

While ETF expense ratios are competitive with mutual fund index funds, there are differences between the two, including hidden ETF costs associated with bid-ask spreads and ETF premiums and discounts from net asset values.

Market trends suggest continued growth and demand for ETFs by investors and advisors in 2019 and 2020, despite some leveling off in 2018. The chart below shows U.S. ETF assets at $3.4 trillion at the end of 2018, an annualized growth rate of nearly 16% over a 10-year period. 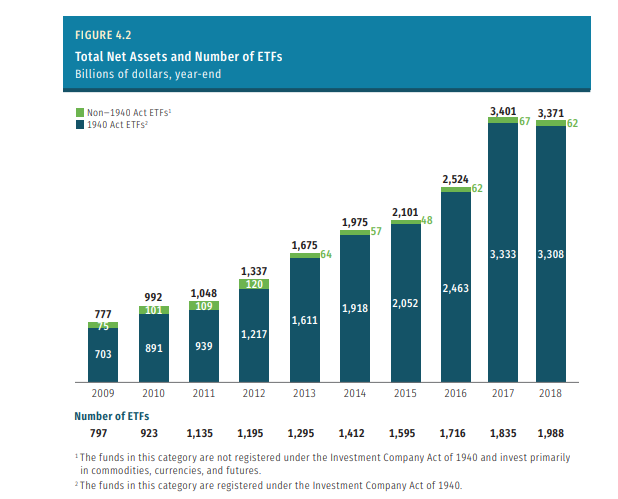 NOTE: Information presented herein is for discussion and illustrative purposes only and is not a recommendation or an offer or solicitation to buy or sell any securities. Past performance is not a guarantee of future results.  This blog contains several forward-looking statements.  As with any projection or forecast, forward-looking statements are inherently susceptible to uncertainty and changes in circumstances. Actual results may vary materially from those expressed herein.