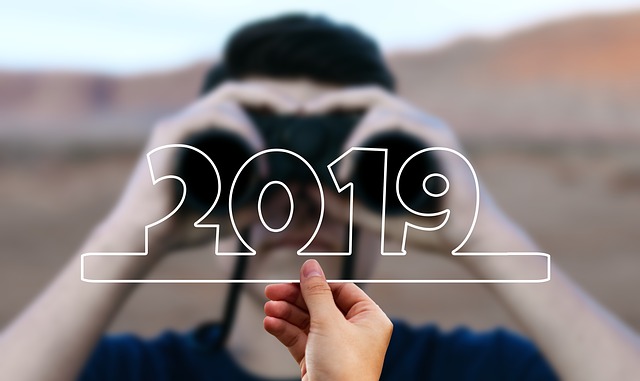 As we head into 2019, below are five questions relating to current trends and topics which are expected to impact retirement and savings next year:

Overall, the reduction in U.S. corporate tax rates contributed significantly to company earnings growth in 2018. It also spurred record company stock buybacks. Through September, these events helped anchor significant gains in U.S. equities, which generally benefited diversified savers. However, revenue concerns and warnings for some companies (e.g. Apple), as well as the expected diminished impact of tax reform on 2019 earnings, have helped create increased volatility and a selloff in global equities in the fourth quarter. Most analysts expect a continuation of stock market volatility in 2019.

On the policy side, higher budget deficits resulting from tax reform have, fortunately, not resulted in retirement plans being directly sourced for additional revenue, through lowered 401(k) contribution limits and other restrictions. Though retirement plan tax advantages do not appear to be in jeopardy for 2019, they remain a ripe target for deficit reduction.

In 2018, interest rates have been a tale of two maturity ends of the U.S. Treasury yield curve. Yields on bonds with short maturities (1 year or less) have risen due to three Federal Reserve (Fed) rate hikes during the year, with an additional hike still a possibility for December. Rates for bonds with longer maturities (10 years and longer), have also risen, but by less than those with shorter maturities, as inflation has remained relatively tame.

The rise in shorter rates has benefited a majority of retirement-age savers. According to bankrates.com, average 1-year CD rates increased from 0.66% in January 2018 to 1.16% in November 2018. Higher rates have also helped increase pension funded ratios and offset volatility in asset returns.

As with any future event, it is unclear with what will happen with interest rates in 2019. The Fed will have to balance a relatively strong U.S. economy and mild inflation, versus external factors such as tariffs, slowing global economies, Brexit, oil prices and geopolitical tensions. There is also the risk that further Fed increases will create an “inverted” yield curve whereby short-term debt instruments have higher yields than longer-term debt instruments. Inverted yield curves have historically been an eventual precursor to economic recessions.

In 2018, the move toward a uniform fiduciary standard for brokers and advisors was disrupted when the Department of Labor (DOL) fiduciary standard, also known officially as the “Conflict of Interest” rule, was repealed by a Federal court. Into this vacuum stepped several parties: (a) the Securities and Exchange Commission (SEC), which issued its proposed best-interest standards in April 2018, which would require broker-dealers to disclose conflicts of interest and to “exercise reasonable diligence, care, skill and prudence” to ensure they are selling products and carrying out transactions that are in a client’s best interest.1; (b) the DOL itself, which announced it will release new advice rules by September 2019; and (c) various states, which have proposed their own fiduciary regulations. New Jersey, for example, has proposed and begun hearings on rules that would create a uniform fiduciary standard for brokers and registered investment advisers.

Given that the target dates for the final SEC and DOL fiduciary proposals are for late 2019, it is hoped that a more global and uniform standard will emerge next year.

While M4A and universal health care likely remain years away as alternative solutions to health care delivery in the United States, political and social dynamics have led to amplified discussion regarding the costs and benefits of both. In addition to Congressional proposals, a number of states have proposed government sponsored single-payer systems, including Michigan, New York and California. The biggest impediment to implementation is expected to be cost, whether funded through income, payroll and/or business taxes.

A compelling statistic is that the United States, Greece, and Poland are the only countries of the 34 members of the Organization for Economic Co-operation and Development (OECD) that do not have universal health care.2 Whether the United States eventually joins the list will continue to be a hot button topic in 2019 and going forward.

While ETF assets remain a relatively small fraction of the total of passive index funds and actively managed funds, there has continued to be an explosion in ETFs.

While ETF expense ratios are competitive with mutual fund index funds, there are differences between the two, including hidden ETF costs associated with bid-ask spreads and ETF premiums and discounts from net asset values.

Market trends suggest continued growth and demand for ETFs by investors and advisors in 2018 and 2019. The chart below shows U.S. ETF assets at $3.4 trillion at the end of 2017, an annualized growth rate in excess of 20% over a 10-year period. 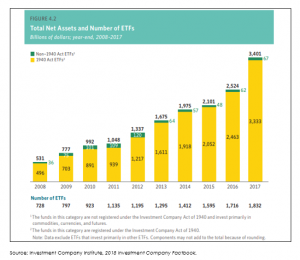