Some Thoughts on the US National Debt

Current discussion of the United States economy has centered on unemployment, oil prices and inflation. However, the most politically charged and debated economic issues in recent times have focused on the national debt, the debt ceiling and the “fiscal cliff.”

The size of the US national debt is huge. The national debt clock1 currently measures over $18 trillion in debt. This debt can be divided into two categories: (a) debt that is owed to, and held by, US and foreign investors and includes Treasury bills, notes and bonds; and (b) debt that is owed to US agencies, such as the Social Security Administration. The national debt is an accumulation of annual deficits, where deficits (or surpluses) are defined as the US federal government’s receipts less expenditures. Given that in most years the US has run deficits which have largely been aimed to stimulate the economy (i.e. increased spending, tax cuts), running up debt has been a necessary by-product of government fiscal policy. Indeed, if the US had little or no debt (which is what is advocated by some groups), tax receipts would be growing at the same rate as government spending and would provide little potential for fiscal policy to help grow the economy in recessionary periods.

How much of the US economy is comprised of government deficits? The attached chart from the Federal Reserve Bank of St. Louis shows the US government deficit as a percentage of Gross Domestic Product (GDP). Over the 1950-2014 period, US federal deficits have generally ranged between 1% and 3% of GDP, but there have also been several years of surplus as well as years with higher than usual deficits. Recent US deficits as a percentage of GDP have been on a par with the United Kingdom, while higher than Germany but lower than Japan.2

Federal Surplus or Deficit [-] as a Percentage of Gross Domestic Product 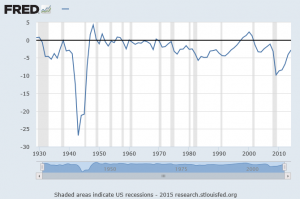 The political aspect of the US national debt has reared its head with two major crises: the “fiscal cliff” and the debt ceiling crisis. The fiscal cliff, which occurred at the end of 2012, confronted Congress with a politically unpalatable combination of spending cuts and tax increases (i.e. expiration of Bush-era tax cuts) all scheduled to go into effect at the end of the year. These spending cuts and tax increases were expected to reduce the deficit; however, economic growth was expected to be curbed by the spending cuts. The resolution of the fiscal cliff retained a combination of tax increases and spending policies which ultimately had little effect on the deficit.

In summary, the national debt is an important part of our national discussion, both in magnitude and political impact. The question is not whether to run deficits but rather to determine manageable levels of deficits in proportion to the US economy. While it may be desirable to reduce the US debt burden over time, there is the risk of recession if the US moves too far in that direction.

1. An abnormally large clock posted in Manhattan that monitors the gross national debt in the United States.
2. Source: Organization for Economic Cooperation and Development (OECD)