The Markets are Bringing Back the “I” Word – How Concerned Should We Be? 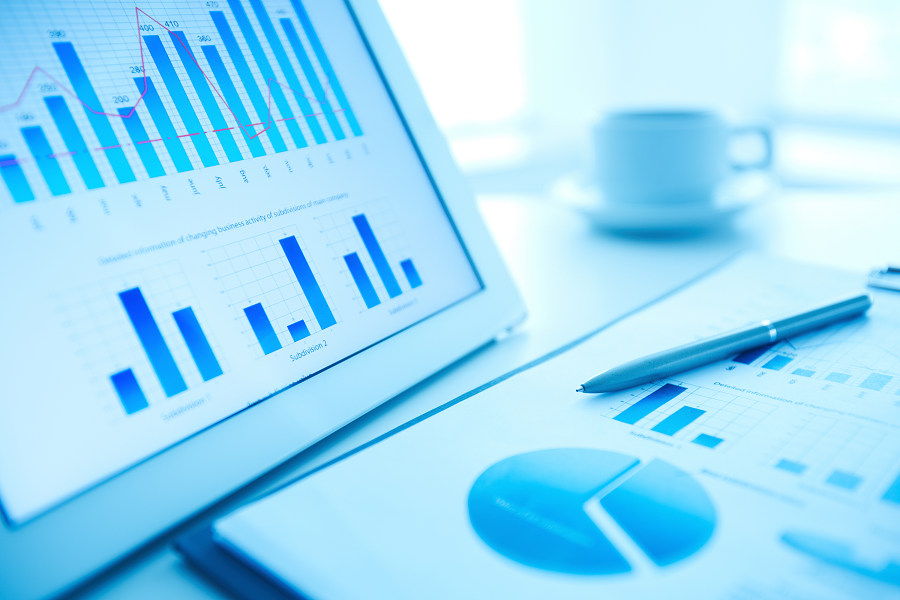 After creating relatively little concern for the financial markets over the past decade, the “I” word, or inflation, has recently been escalated to headline status.

There has been wide agreement that the world’s economies have experienced a low rate of inflation over the past 10 years. A low rate of inflation means that overall, prices of goods and services (i.e. the cost of living) are going up but at a very slow rate. In fact, there have been periods when prices have been falling, leading to what is known as deflation. However, that still means that certain items, such as health care and college tuition, have exhibited higher than average price rises.

The most common measure of inflation in the US is the monthly Consumer Price Index (CPI-U) reported by the Bureau of Labor Statistics (BLS). On an annualized basis, the CPI averaged 1.7% from December 2010-December 2020. Contrast this with periods of double digit inflation in the 1970s and early 1980s, primarily caused by spikes in energy prices. Inflation began leveling off beginning in the 1990s.1 (See Chart below) 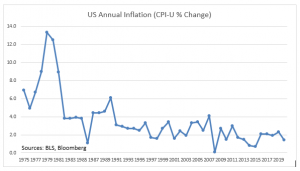 Why has inflation overall remained relatively low? Increased productivity, competition and technological change have reduced the cost of many items such as personal computers (PCs) and cellphones. Energy and food prices have stayed relatively stable, with the exception of several periods when prices spiked due to shortages and supply disruptions, such as due to the Covid-19 pandemic. Economic growth, although steady, hasn’t triggered the surge in demand which would significantly push up prices.

How have the financial markets benefited from low inflation? Since the arrival of the Covid-19 pandemic, it has allowed the Federal Reserve (Fed) to keep interest rates near zero by injecting trillions of dollars into the stock and bond markets without immediate concern that inflation will surge. The Fed had previously set an annual inflation tolerance of 2%, but will now allow inflation to rise above that level before considering pulling back on its support. The Fed, along with federal stimulus programs, have helped stock markets surge to record levels, sustaining multiples rivaling the dot-com era of 1999 and 2000.

So why are we hearing more concern about inflation lately? As markets look into the future, most analysts expect inflation in 2022 and beyond to be higher, even though there is little evidence of significant current inflation or general concern for 2021. Future inflation worries center on a potential surge in demand as the global economy recovers from the pandemic and as stimulus money, which is being currently saved, is spent. An indicator of this concern is the 10 year breakeven TIPS yield, which is an indicator of future expected inflation. This yield has recently risen above 2% after being under 1.5% for much of 2020.

What are some of the implications of higher inflation? The main concern in the markets is higher longer term interest rates, which would rise to compensate for higher inflation. Higher interest rates could reduce company values, which might lead to a pause or pullback in their stock prices. Another potential concern is that the Fed may pull back its massive support to fight any surge in inflation, which would then slow economic growth and stock prices.

While nobody has a crystal ball, it is fair to say that inflation is generally not a current threat, and this pattern of low inflation has been backed by recent history. Going forward, however, the inflation story will become more of a wild card and create additional volatility in the stock market. However, even if so, it remains to be seen how the financial markets will react over the next few years.

NOTE: Information presented herein is for discussion and illustrative purposes only and is not a recommendation or an offer or solicitation to buy or sell any securities. Past performance is not a guarantee of future investment results. Diversification does not guarantee a profit or protect against loss.